“You know what’s funny about you, Hal? You’re supposed to be the main character of this episode but everybody will ask himself what the hell you’re doing in this episode…”

It’s always nice to be surprised but sometimes it really seems like people forget what the benefit of consistency is. Dantalian no Shoka shows again this week that there’s no such thing as “like expected” with the episode structure of this series.

Hal, a libricide officer and Flam come to a town in search of two individuals involved in the evil use of Phantom Book’s. While initially the town seems peaceful as they stay at Mabel’s home who is a police-woman in that town, Hal quickyly discovers ruins of another city and that some of the person in the town are actually puppets. Acting upon this discovery Hal and Flam go the old weapon factory finding hundreds of puppets who manufacture other puppets. Mabel then reveals herself to be the mastermind behind the puppets doing and explains how the city was bombed during the way as she and her little sister could escape the inferno. That’s when she met a man and a young girl, the latter offering her a Phantom Book that would help her rebuild the city. After only 20% of the people survived Mabel used the Phantom Book to revive the rest of the people as puppets. Hal uses then Flam to get a Phantom which he burns with a staff that acts as a flame-thrower using Phantom Books as its fuel. With that he burns the puppets and Mabel’s Phantom Book. He brings her then back to her little sister telling her that she will remember nothing of her time with the Phantom Book. Dealt with the Phantom Book in the town Hal and Flam travel on – knowing that they’re on the trail of the two persons they are searching. 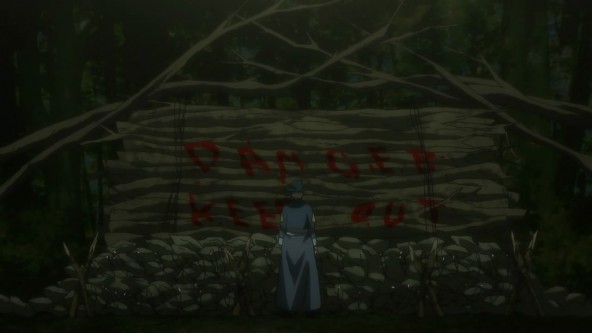 This was an episode that really came out of nowhere with its choice of new main-characters. And the approach wasn’t that great even if the episode itself was quite good for Dantalian-standards.

This episode tried to introduce new character, but not only that it tried to build a connection to Huey and Dantalian (even though they weren’t shown in this episode, we know where this stuff typically leads… to misunderstandings). But it’s rather vague and aside from the usual “Phantom Book of the Week” the series doesn’t help the audience with the question why one should care about Hal and Flam and their mission, journey, search, whatever. And I think that’s the biggest problem of that episode: It’s too vague.

“So, all the customers who ever liked my place were actually crazy puppet-maniacs? Well, time to get depressed, I guess.”

Hal and Flam certainly have a clear dynamic in the roles they play but the question is: Are they good are they evil? Of course, one may assume that this episode tried to make this girl with the Phantom Books in Mabel’s flashback look like the evil one in contrast to Hal who hunts her. Mabel was a victim between those two sides which had two very different ideas about what one should do with a Phantom Book. For the mysterious evil girl Phantom Books seem like an answer to temptation and the fulfilment of dreams and Mabel’s story showed again that Phantom Books handled without responsibility are more destructive than helpful. But does that make Hal good? Because he, you know, burns these Phantom Books – and burning books doesn’t seem that good to me either.

And I really would have like this episode more if it had showed more clearly how morally ambivalent the story actually was because of the contrast between Hal and the mysterious girl with the Phantom Books. It seemed really out of place when the episode tried to convince the viewer that Hal was the good guy here and Mabel the victim corrupted by evil. Hal could’ve actually been a villain with his urge to burn Phantom Books or he could’ve been a anti-hero who does what he has to do and pays the price for it. But like that I found Hal rather bland and Flam was just sort of there but of no real importance or significance as a character.

Mabel’s story was also rather… strange. So 20% survived and Mabel comes with her bright idea to revive their loved ones and the rest of the city by making puppet-copies of the dead. But Mabel’s puppet-parents showed that the way these puppets act is flawed. There are two things that bothered me because of that: First, why did the rest of the town go along with that? It’s creepy to see a friendly face from your daily life and know that this is a puppet and not a living human being. These survivors should’ve gone crazy instead of getting all sentimental about Mabel. Second, the flaw of the puppets and why they killed the puppets made sense but wasn’t shown in the earlier parts because talking with such a puppet must be awkward. That’s something which they should’ve done at the beginning as they introduced Hal and Flam to the town-setting. Instead it seemed a bit sudden how this whole thing with the puppets came up and how it was explained character-wise.

Aside from that there was the whole mystery between Hal and his job as “libricide officer”. So there’s a whole organisation out there who sends people out to burn Phantom Books? Shouldn’t they mention stuff like this before? At least I figure this organisation must be one of the big players in this setting if they have a Hierarchy of people devoting their lives to destroying Phantom Books. Flam and the mysterious girl from Mabel’s flashback also raise a curious question: Are Phantom-Book-Libraries always little girls? It seems like the setting as it reveals itself is much less non-mainstream than I initially thought. Phantom Book’s are now just thrown around as flimsy explanations for supernatural powers which then lead to typical Shounen-Battles.

The sixth episode comes back to the supernatural mystical flair of earlier episodes but a bland presentation of new characters and a not very deep story that fails to use most of its potential make this episode a rather uninspiring experience.