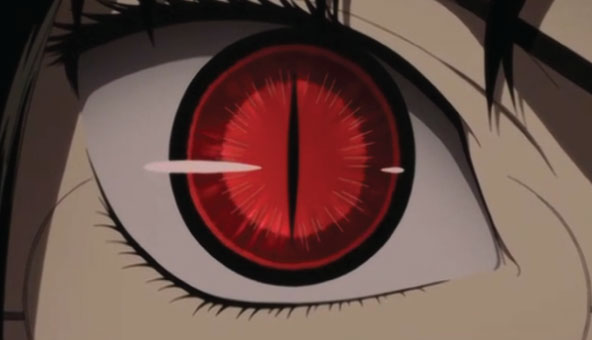 So how does one start off reviewing one of the most talked about series of the Summer 2011 season for all the wrong reasons?

I guess one should do the opposite of what Blood-C did and simply get right to it.

Saya is a seemingly normal girl living with her father in a shrine. During the day she goes to school and spends time with her friends at a local cafe. But when night falls Saya is called upon to protect her village from strange monsters. – ANN

If you don’t already know, Blood-C is part of the Blood Franchise that comprises of the anime series Blood+ and Blood: The Last Vampire. This original-story (always a concern) is written by the famous group CLAMP. Needless to say, it was one of the most anticipated series of the season.

(If you liked either of those Blood series, I suggest you try and distance yourself from thinking that this would be similar.)

As I have said before, this series is probably one of the most talked about series of the season. During the first part half of the season, people were speculating about the many ways this series could turn out (refusing to believe that the series could simply be bad) and types of possible plot twists that we might see. But soon after, many realise that this series may not have been what they had expected it to be. Instead of something “magnificent”, it simply turned into a series with one dragged out plot line with numerous teasers and blood. To say that least, frustration was running high for many.

However, despite how painful this series was to watch at times, I would still looked forward to reviewing this show each week simply because of how bad it was at times. I actually manage to find it entertaining to see how stupid some of the characters were and I, being a human, loved to complain about them. 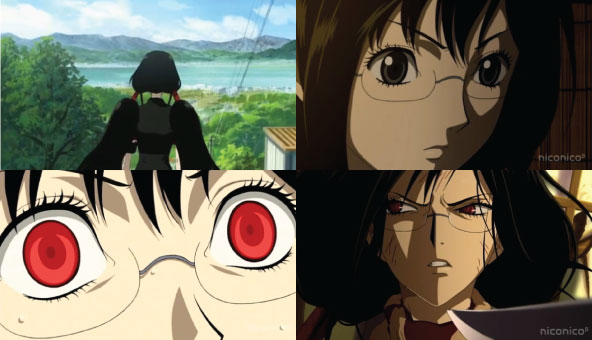 The plot itself is filled it insurmountable (I may or may not be exaggerating) plot-holes that make little or close to no sense at all and to top it off, the pacing of this story was simply TERRIBLE.

The first episode of the series essentially repeats itself three times before moving on to progressing the plot a bit more with each passing episode. Every episode becomes a tease and it is not until the last 2 episodes where we finally start to learn more about the situation. If that is not bad enough, it is actually only in the very last episode where many things are revealed and explained to us. The worse part is that this twist was nothing original and unheard of, and it was definitely not worth the slow and long wait.

I would rant about the plot of this series but you are better off reading the reviews for each episode that I have written. (I don’t wish to torture myself with the pain of reliving every episode in my mind) One thing that you should remember is that this is undoubtedly a CLAMP series that has taken on elements of the Blood franchise and not the other way around.

The buildup for the series is like I have said, slow and tedious and really not worth the wait. I do not want to spoil the show for you because god knows, the show is not really worth watching once you actually know what is going to happen in it. There are some shows where knowing the ending doesn’t affect the show too greatly as it is the journey that actually makes the series and not that one revelation. Sadly, this is not one such series and knowing the outcome is essentially as good as having watched the whole series.

But, despite my complaints the series had a few upsides to it.

For instance, the plot continuously hinted at things quite nicely thus effectively building up the suspense and piquing the curiosity of the audience. Another thing that I like was the use of the Blood. At first I could not stop complaining about how over-the-top the amount of blood in each episode was, but if I were to give the writers the benefit of the doubt, it was a pretty smart idea to use the exaggerated amounts of blood to ensure that the theme/importance of “blood” stays top-of-mind for the audience as the writers continue to drop hints through the series. After all, everything in this series did tie back to its title (in a literal manner).

The atmosphere of the series was also pretty decent most of the time. However, liked I have said many times before, the execution could have easily been better.

The movie for Blood-C is expected to come out later this year and this made the series feel like an extended trailer that never end, especially since the last episode of the season seemed to be the only one the production company placed any real effort into and actually used it as a way to recover from the damage that may have been done by the rest of the series and make sure that people would be once again interested (or remain interested) in watching the movie.

Here comes the painful/worse part of the show.

This is a show that highly dependent on its characters supporting the plot and it is painful to see that all the characters were either annoying or ridiculous.

Our Main Character, The “Special” Saya

Saya is one special girl. She is probably the only main character that I can remember who is actually retarded. She is forever frustrating and no matter what the “plot twist” is there is no excuse for her inability to realise certain facts. The way in which she was so oblivious to everything around her was simply ridiculous and unbelievable. No matter how stupid a person is, I am sure that all humans are naturally program to questioned. Be it us questioning our existence or our surroundings, we are born as curious beings. Sure, one can always use the plot twist as an miracle excuse for many of those questionable attitudes, but it makes it no less annoying to watch.

If obliviousness were her only issue, that would have been not as bad. You couple that with the fact that she acts retarded on so many levels (i.e. her behaviour when it comes to “saving” people) and what you get is a big question of “who the hell thought up her character and what were they high on?” Like I had said above, you can excuse many of her odd behaviors by saying it makes sense because of the story, but that just means that the story is turned into an excuse for everything.

What the hell was wrong with everyone? It felt like because of how the plot is meant to play out, the writers decided to just let everything go and let the characters become as ridiculous as possible since it would not matter too much anyway. Like I had said, I don’t want to add any spoilers into this review so I shall try to convey my thoughts as brief a manner as I can. Some may appreciate the fact that the change in character personalities were inline with the twist. My patience however was already wearing thin by that point in the series and that simply was one thing that I could not accept.

The cryptic messenger of the group. From start to finish, this dog drops cryptic hints that eludes people to the main plot. That does not sound too bad does it? But it is when his is the only character that continues to be cryptic even when the rest of the cast were starting to resolve the story for the series part of the show. Someone should have sent that dog a memo to let him know that he was lagging behind.

If you are under the mistaken impression that the main character was the only retarded one, please understand that almost everyone (minus the “villains”) were retarded in their own way be it small or big.

The first thing that everyone would realise is that CLAMP has definitely put their stamp on the character designs. The stylistic small heads long limbs character quirks of CLAMP are evident in their designs for Blood-C and most CLAMP fans would be happy to see this and this would have already been a foot into the hearts of their fan-base simply through theses designs. Character designs may not be everything, but no one wants to look at an ugly character. Then again, when it comes down to Ugly VS Stupidity, my morals come into question with this show. =P 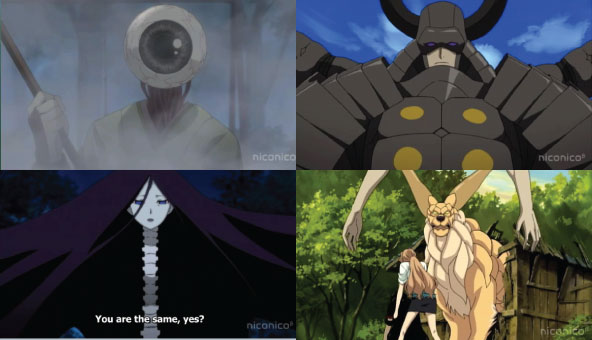 The character designs for the Elder Bairns were pretty laughable at times with no clear style to them. All the designs seem epically different that you would not related one to another except for how ridiculous they look and the fact that they were all monsters. I felt that having some consistency in the design style really would have helped this show. (But this show has bigger issues to fry)

Another thing about this series is that the animators really do not hold back on the blood and take their series name a tad bit too literally. Episode after episode, our screens are filled with blood. I understand that it may have been used as a way to “trigger” the “blood” as being a hint but it ended up looking more foolish and unnecessary than smart.

This brings me to the point of the censorship. Halfway through the series, all the fight scenes were plague by ridiculous manners in which the gruesome scenes were censored. This issue would be one of the few positives of actually purchasing the DVD since that would be that you would be able to actually watch what happens instead of a white/black scene that leaves it up to your imagination instead.

The fight scenes were one thing that I would constantly complaint about. Until the last episode, most of Saya’s fights were won by a simple activate and thrust routine. It got old really quickly and I was hoping for some nice fighting choreography.

The background music for this series was actually well picked. Without the music, I think that the show would have been a lot worse. The show may have been complain worthy but the reason why people continued to watch was either out of curiosity, because they love to diss things, or because the atmosphere of the show was decent enough to capture people’s interest. I believe that the soundtrack really played a big part in the atmosphere building.

As for the OP and ED songs. I don’t really care for them and find them to be sub-par in standard.

Even Saya understands that this show is not without its moments of frustration.

It was a series that was way more interesting to talk about than it was to actually watch but the fact that I still persisted and continued the series must stand for something. I won’t be running up to people telling them to watch it anytime soon, but I would recommend it to friends just to see what sort of reaction I would get out of them.

Honestly, if you were to simply watching all 12 Episodes in one sitting, it may not be as bad as it seems since the biggest issue of this series is its pacing which inadvertently meant that people were hoping that the revelations would be worth the wait. But if you are simply watching all 12 episodes in one shot, it probably entertain you well enough. It is definitely bloodier and gorier than the other Blood shows.