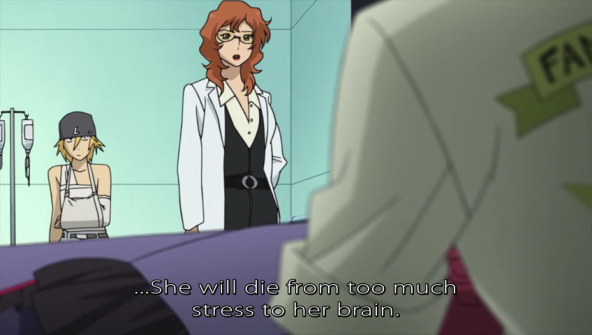 Isn’t that exciting? If they don’t wake her up soon enough she will die of dreaming too long!

Towa no Quon 3: The Uncanny Q-Men And The Networked Brain

What happened so far: The first movie showed us a bunch of social misfits and do-gooders living in a giant garden together to bring about world peace fighting against a team of cyborgs led by a pompous asshole who always introduces himself saying “I’m an evil villain… Get Insania, you lazy bastards whose names I never remembered!”. Just as a reminder the poor guys running a giant entertainment park are the good guys and nobody knows that they are actually the Uncanny Q-Men – because the bad guys still fumble with adding one and one together. But what the first movie was really about was a mute girl starting to talk again because she hated talking but she still loved singing. So she starts singing and then talking… Mission accomplished, everyone thinks and the first movie ends. In the second movie people die and the Robocops actually try to do something besides catching Insania but again they are behind the action as the Q-Men stumble upon this sweet-smelling but whiny kid who talks to flowers. And the flowers tell him that they need love, human love. But as I laughed about this idiocy I realized that the kids at the Q-Men’s entertainment-park (which is also an orphanage) also laugh about him. Feeling satisfied with my wise insight I went on watching the stupid kid making an ass out of himself and getting targeted by the Robocop’s who also finally realize that this kid is a gardener – and the gardener is always the murderer. The Q-Men also arrive and stuff happens which leads to the death of the kid but not before he tells us once again that plants need love, human love. Before I started to question myself whether I really need to hug a tree in a park to help the environment I watched the third movie which has another kid with strange powers doing shit but I kinda forgot about him during the movie – because the movie did so as well. Yeah, the final twist was a head-scratching moment of “And there’s the kid from the first five minutes of this movie, remember him…?” and like the protagonists I think he was just a bystander who happened to become a plot-device. It’s not his fault! Seriously stop blaming him, I mean, it’s not even clear what exactly his power was supposed to be… 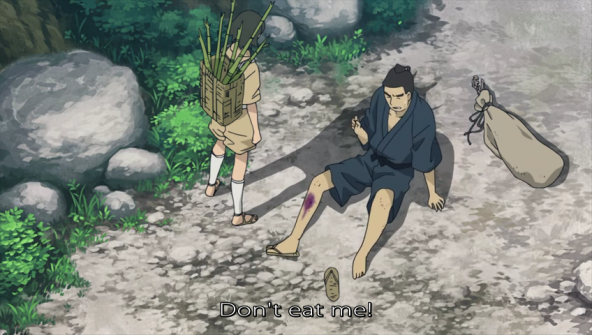 I really love the medieval times. Back then they actually could still mistook someone for a demon solely based on his looks. Stuff like that is always cause for a spirited discussion! I mean, when else would someone start his talk with a stranger by saying “Don’t eat me!”?

Review:
After an improvement in the second movie I had some hopes that the third movie would start to think about its juicy parts but in the end it was a rather meager offering story-wise. This movie’s story is so short-lived that at the end of it you’ll wonder “Did I really spend fifty minutes watching this?”. This movie doesn’t have to say much but it’s clear that it has set itself two tasks: exploring the past and showing an exciting race against the clock.
The first thing I noticed while watching this movie was how baffling its story is. It mixes Q-Men telepathy with Cyberpunky bio-hacking – I guess… Honestly it’s difficult to say what the logic behind the movie’s plot is. So one of the Robocops tries to attack one of the female Q-Men who has telepathic powers and a new kid with special powers yet unknown at the beginning and then it happens: All three fall into unconsciousness. And they dream. Not only that but because of the telepathic bond provided by the female Q-Man. So far I get what’s happening. But then the scientist of the cyber-cops says that the dreaming Robocop has a telepathic connection to the other two dreamers and he wants to trace it to its origin thereby discovering the enemy headquarters. That’s okay, too, but then the hacker-guy of the Q-Men starts treating the unconscious female Q-Man’s brainwaves as a sort of computer-thingy to which you can apply all sort of computer-hacking-popculture-logic. Like for example sending people out with ‘copies of her brainwaves’ in the form of USB-stick-like transmitters that are placed around town and the cybercops’ hacker has to go through all of them until he can find the original signal. Don’t ask me when tracing brainwaves became the same thing as tracing radio-channels. It sure isn’t Hard Science Fiction, I can tell you that.
The other half is Quon’s past and this one Robocop’s past and I’m disappointed how little time they spend on that. Judging from the preview I expected the flashbacks to take the centre of the stage in this movie but instead it got a secondary role although that stuff could’ve needed the time to flesh out the character’s background. But with the little time the movie gave the flashbacks it ended up being rather generic. Quon’s part basically described his brother apparently dooming his tribe of earls Stone-Age-Q-Men (or something like that) by showing his power to an ignorant dude from The Village. And it ends with guys from The Village burning down Quon’s village and killing everone – except him. He goes berserk and kills the whole army by himself. Yeah, really touching story, not that the movie puts any effort into making me care for the whole thing besides using an interesting art-style for the grim proceedings of people killing each other and Quon massacring everyone. The other past that got revealed in this movie is the Robocop’s past of having a cute moe little sister – who becomes a giant frog who kills their parents all the while pleading her older brother to help her. Well, another very touching story, there’s only one problem: Why would the Robocop end up hating the monsters in the absolute way he does in the present of this story? Details, it’s always the details where the Towa no Quon series starts falling apart.

Well, Quon surely isn’t the ideal of compassion he thinks he is saying this to the Robocop…

The plot of this episode feels very jarring in the way it tries to make everything seem like a race against the clock but the story never has a sense of urgency. The main-reason for that is the pacing which is really slow. But its slowness doesn’t show itself in how long things take to happen but in the way things happen which are announced to be dangerous… and then the same thing happens again. You know these “OMG, only ten seconds left, hurry up!”-moments in the last minutes of movie? Well, this movie has around seven of them. And to be precise it’s just people standing around throwing at you some numbers. It’s true for the whole movie except the flashback-parts that the dialogue loves to be full of banal bullshit. You know, it’s this kind of dialogue:
Science-Dude: “This happened which is strange because of this other thing.”
Boss-Man: “So considering this thing that happened this can only mean that. And we should do some stuff related to that.”
Science-Dude: “But if we do that stuff happens!”
Boss-Man: “I don’t care for that stuff. Do it anyway.”
Just replace this vagueness with some funky important-sounding words and you get a typical dialogue for this movie. The dialogue-style of this movie is the kind which believes it’s pondering about important things – when it’s not. And that leads to a lot of time-wasting blabla which is also getting repetitive when the dialogue itself realizes that it doesn’t have much to talk about. In its essence you could have told this movie’s story with a normal 20-minutes-episode. It wouldn’t have gotten better because of this, though, it would still be an average episode but stretching the story like that made it worse. There’s also a moment where Quon stuck in his memories relives one experience twice but instead of letting him realize it right away I saw the first minute of his flashback twice in this movie and in a movie that has such a jarring pacing to begin with such a repetition is simply fatal. I’m bored because nothing really happens in the present and now because of some magic-science-crap I have to rewatch the flashbacks? It didn’t really help the story which wasn’t very convincing in its plot-logic to also have such big issues with its pacing.
If you can overlook the issues of its logic and pacing the movie was a solid effort. It’s the kind of average and forgettable fun nobody will talk about in a few years. If you just sit down and shut your brain down watching this it’s acceptable entertainment but like I said it’s apparent that the story isn’t very well thought through. The story just got thrown into the room and the audience is told to deal with it. There’s no subtlety or some overarching issue to be found. It all seems like started but not finished story-wise. I mean, the first two movies did seem to focus on something environment-related but this third movie wanted to talk about Quon’s and the Robocop’s past but in the end it was secondary to a repetitive and boring duel of hackers (or something like that).

While it isn’t as stupid as the first movie or as hilariously stupid as the second one, it’s still obvious that Towa no Quon has a habit of basing its stories on really silly ideas. This time the problem is a simple case of forgetting to tell us what’s up and down if you take gravity away. Simply presuming that its story is sound the movie goes on establishing a weak repetitive race against time and two mildly interesting flashback-stories. Ultimately it’s not clear why this movie needed 50 minutes to tell such a meager story.