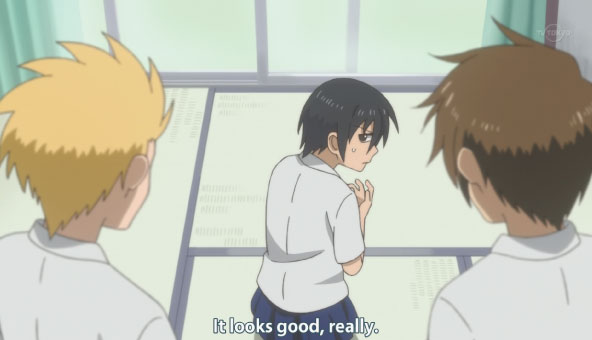 Don't worry, this is not some Boy Love, Yaoi series. It is just a group of high school adolescenct boys being stupid.

“Daily Lives of High School Boys” is this season’s “Group of High School Boys” Slice-of-Life series. Being an adaptation of a gag manga series, this show definitely wasn’t what I had expected it to be. Instead of the much expected sentimental flare, we were treated to a few good laughs instead.

After last season’s disappointing start to Kimi to Boku, I was definitely weary of this season’s “high school boys” series. Thankfully, things are looking promising for this series and definitely much more entertaining than the first episode of Kimi to Boku.

With a cast like this, it is no shock that the show heavily depended on the voice actor’s ability to deliver the lines in a comedic manner. If you had thought that some of the voice actors had sounded familiar, you would be right.

I am not sure if any of you are the type of people to concern yourself who the voice actors of a series are, but I personally find that certain voice actors have the ability to determine whether a show is worth watching or not (though the downfall is usually mostly due to a poor plot. I mean, if a story is good, its good.). In this case, the VA are definitely the ones who have captured my interest in this series. 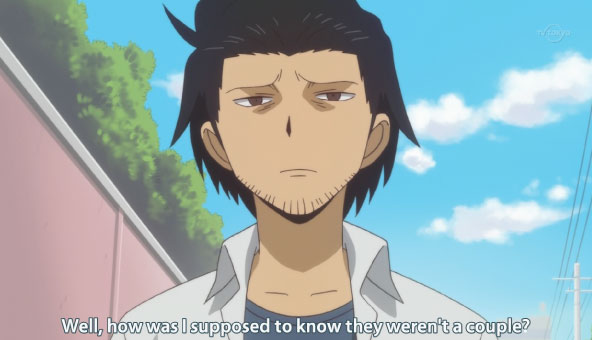 Although I haven’t read the manga, this episode has made me certain that the manga is most likely a short-story manga. This really seems to be turning into a season of shorts with the appearance of short-story series like “Recorder to Randoseru”, “Kill me Baby” and now this series. But where the first two had failed, this series had manage to succeed. I am not saying that this show is some hidden gem, all I am saying is that the pacing is actually quite nice in this this show. Although the endings do tend to appear quite abruptly, each short story manages to develop a decent buildup before it’s climax.

Since it is a gag series, the question you are probably wondering about (or not) is whether this show is funny? After all, whats the point of having a star cast if the show is as boring as watching my dog’s attempts at chasing his tail? (Which can actually be quite amusing to watch at times.)

Well, to answer that question, there were a few moments that had cracked me up, but the episode was a bunch of hits and misses. The best short in the episode was definitely the last story about the river bank scene. I couldn’t help but laugh at the ridiculousness of things, and honestly, the personalities of the characters definitely cracked me up. Then there were those moments where I was simply waiting for the punchline to be delivered only to be disappointed. In short (no pun intended), not every story is worth the watch, but with each segment being so short, it honestly isn’t that bad to sit through.

As for the structure of the jokes… for the most part of it, it is rather straightforward. The first part of the story tries to build up to a punchline/twist that is meant to be delivered towards the end of the short. If you’re lucky, you’ll be able to catch a few laughs here and there before the big punchline, but don’t expect anything profound. Some of the jokes tend to be something that you would’ve spotted a mile away, but then there are those few fun moments that made it feel like it wouldn’t have mattered if the joke were expected simply due to the way the characters had delivered the lines.

Moving onto the characters of the series…, The show has it’s fair share of oddball personalities which ensures us that things will never really get too boring, and if they do, it’ll be over before you know it and they’d have moved onto a new story. The reactions of the characters are definitely the highlight of the series and this is where I refer back to the fact that the choice of voice actors makes a difference. The over the top exaggerated attitude of Sugita Tomokazu is always a delight to listen to, especially when the story is actually decent. However, I am still not sure if I am really loving any of the characters just yet, and this is a worry since the series really banks on the character’s ability to appeal and connect with the audience. After all, jokes are always more interesting when you love the person who’s telling them.

The character designs in this series isn’t the greatest and the animation has this dull tint to it. The background music honestly gets lost and I found myself wishing that there was some sort of “extra” element to help with boosting the mood of the series. Even when the BGM was playing, I felt like it was as good as silence. The biggest problem was probably the animation, just like the jokes, the animation was rather simple and we were constantly shrouded with zooming, panning, and still-frame shots. If you are looking for some creativity in a series, I urge you to look elsewhere. This is definitely not an inspiring series to be watching if you are a budding animator. 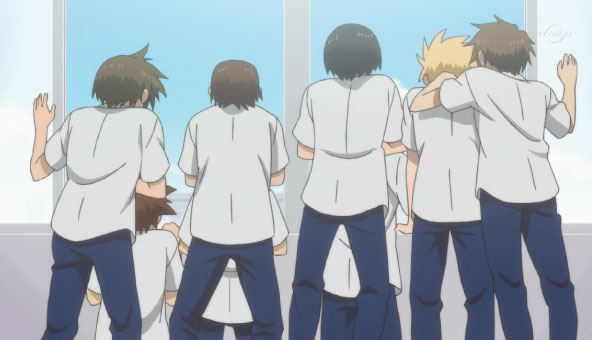 Overall, this is a pretty simple comedy series revolving around a bunch of high school boys simply acting like boys. With the way the series is structured, each short will be over before you know it and you’ll be hit with the next one without missing a beat. If you are looking for an on-going plot, I honestly don’t think that this series would be able to deliver one. Each short seems to be unrelated to the previous and it feels more like you are watching a bunch of kids fooling around after school each day (like the title suggests). I am honestly not a huge fan of shorts, but I’m willing to give this series a shot. Hopefully this show will turn out to be a worthy series to watch out for.

Episode Rating: 7/10 (was tempted to give it a 6.5, but the last short was good and the episode wasn’t all that bad as a whole)

So, did the first episode turn out to be better than what you had thought it’d be? Or was this just another one of the many “rubbish” series that’s out this season?

Like it or hate it? I’d love to hear what you think of the show. =)