← How Being An Otaku Can Influence Trade
Sankarea – 05 Review → 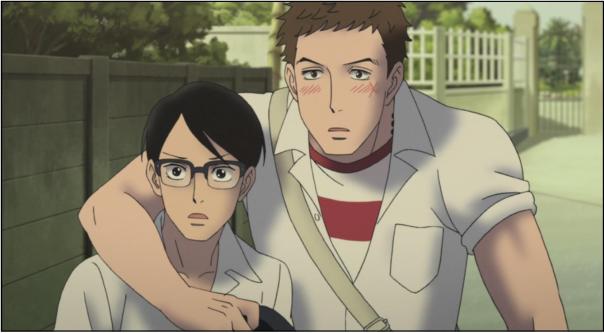 Well, I took a little break to do exams, and I surely wasn’t expecting to come back and find that such massive developments had happened in the Sakamichi-verse while I was gone! For now I’m just going to touch on the highlights of Episodes 03 and 04, and I’ll be back to regular reviewing for Episode 05.

And, just in case you were wondering, I got straight A’s! 🙂

Interesting stuff going on here. I’m not entirely sure if I’m happy about having so much romance (and so little jazz) in a series that is supposedly focused on music, but the love triangle introduced in this episode is above average for obligatory-anime-love-triangles. Actually, I watched the episode twice, and I’m still not totally sure who likes who – there seems to be some deeper mystery to it all.

Basically it breaks down like this: Sentaro has a massive crush on the girl he rescued at the beach, Yurika, and Kaoru is still googly-eyed for Ritsuko. But who do the girls like? It’s complicated.

Sentaro screws up when asking Yurika out and says that Kaoru is actually the one asking her on a date. Later, during the group date, Yurika makes a point of telling Ritsuko that Kaoru asked her out. And that’s where things get fishy.

For the life of me, it seemed to me that Ritsuko was interested in Kaoru, and she was upset/jealous/angry because she thought Kaoru had asked Yurika on the date and was being cock-blocked by her oaf of a best friend, Sentaro. That’s really what I thought was going on. But maybe not? It’s hard to say – Kaoru is convinced that Ritsuko really loves Sentaro, and it is possible that this is the case… But… Whatever is going on here, it’s more than enough to make the love quadrangle interesting, and stand out from the hoards of generic harem-love-triangles, where every female is in love with the lead male. I’m very curious to see how it all pans out.

The other major point in this episode was Kaoru’s visit to Sentaro’s house. I really appreciated how obvious Kaoru’s discomfort was, and it seemed very realistic. Just by Kaoru’s expression, you can see how surprised he is to see the state of poverty Sentaro lives in – the torn paper doors, all the dirty children running around, mom hanging the wash in the dirt yard – it’s about as different from Kaoru’s home life as it gets. Even more striking was the difference in the amount of happiness and love that Sentaro’s family has for each other compared to how heinous Kaoru’s evil aunt and cousin are. Watching this scene, you could really see all these things going through Kaoru’s head – his semi-disgust at the dirt and poorness, combined with a palpable longing for family affection. It was so well done! Rarely do you get the pleasure of seeing such awesome directing, subtlety, and conveyance of complex emotions in anime, and I enjoyed it to the max.

Then, surprise! Kaoru’s confession. I really didn’t expect that to happen so quickly. I’m happy about it though, since it means that there’s plenty more episodes to really explore the romance instead of the all too common confession/riding-off-into-the-sunset last episode. And, Kaoru’s confession was totally smooth…

Which brings something else up. Am I the only person who is wondering what happened to Kaoru’s shyness and anxiety/stomach issues? Wasn’t he supposed to be totally socially inept with no friends and mostly unable to talk to people? What happened to that part? I know that befriending Sentaro and loosening up through playing jazz was supposedly helping him become more chill and sociable, but it all seems rather fast. Like, at the beginning of this episode, Kaoru and Sentaro are already just like best friends, with no secrets between them. And it’s shockingly easy for Kaoru to talk to Yurika and plan their group date, and he isn’t nervous or strange for even a moment during the date. 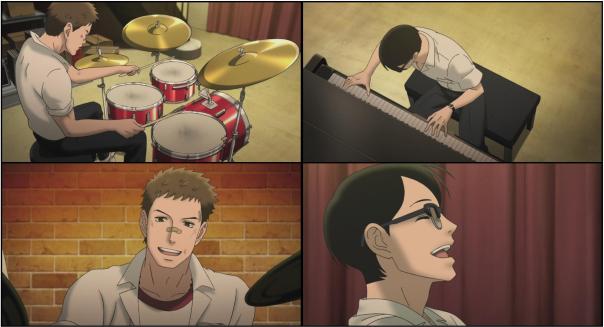 And the confession? Other than feeling like he wanted a few more days or weeks of practice, he sure wasn’t nervous about it *at all*. Wouldn’t this probably be the first time he’s confessed to a girl? I’m not sure about all of you readers, but I’m still nervous to confess to someone and I’ve been out of my teens for plenty long. As a high-schooler, that sort of thing was totally nerve racking. Especially when you consider playing the piano like he did – I think that a real person’s hands would have been shaking far too much to play anything!

Episode 04 – The Darker Side of Jazz

What an intense episode! I was really blown away by how the subject of racism was introduced here – first, with the prejudice and hatred shown to little-Sentaro for being half American, and then later during their gig when the drunk soldier started hollering about black/white jazz. Bringing these issues into the show really defines it as a period piece, and reminds the viewer of the historical setting. That’s good to see, since nearly everything else (the love/friendship stuff, the band) could happen in any time or place.

I’m glad they talked more about Sentaro’s past… But what a terrible past! Showing his childhood really fleshes Sentaro out, and makes his behavior and quirks understandable. Not everything was explained though, and I’m a little confused – is the place Sentaro lives now an orphanage run by the church? Since his grandmother died, his mom ran off, and his “dad” left town, who exactly was the woman he called “Ma” at home? And how did he end up being a Christian and getting to know Ritsuko? I guess these specific details aren’t too important in the end, but it would be nice to clarify things a bit.

The romantic developments in this episode were unexpected and didn’t settle any of the questions from Episode 03. Kaoru kisses Ritsuko (once again, a little bold for a guy with debilitating anxiety attacks), and all she does is run off and cry. That’s it. Post-confession but pre-kiss, Ritsuko wasn’t very awkward, and after the kiss, at the nightclub, she wasn’t being especially strange or awkward either.

It makes me wonder about Ritsuko. Is she just stupid? I mean, she’s always acting happy and cheerful, completely oblivious to the vibes around her. Why is she like this and what’s in it for her? I hope that Ritsuko gets some background/development soon, because at this point she’s a totally one-dimensional (and mostly useless) character whose only purpose is to further the plot by giving the two boys something to fight about. I was feeling frustrated with her character by the second episode, wondering when she was going to do something besides serve lemonade and smile a lot. Doesn’t she play music? Well, maybe that’s too much to ask, since at this point I’m not sure if she is capable of having even a simple conversation.

And what’s going on with Yurika at the end of the episode? It seems to me like she is interested in being more than friends with Jun, the trumpet player. Poor Sentaro! I can only imagine that Yurika getting together with Jun would have some serious implications for the jazz band. I can imagine Sentaro finding those two in bed together and completely flipping out. But maybe all the guys can just resolve their differences by playing a song or two while the girls stand around and smile at nothing… It seems to have worked for Sentaro and Kaoru so far.

The last thing I’d like to point out is that time in this series moves strangely. Here’s a breakdown of the timeline, from what I can figure: Episode 01-April, Episode 02-July, Episode 03-Late August/Early September, Episode 04- Late November through Christmas. That’s a long time to cover in four episodes. It makes the bonds between the characters more believable seeing that they’ve had nine whole months to get close to each other, but something about it doesn’t sit too well with me. Putting the dates on the screen at the beginning of each episode would help, really anything to remind the viewer that months and months have passed would be beneficial to the pacing and make it seem less contrived.

Overall, I still think that Sakamichi is the best show of the season, but it’s not without its faults. The most enjoyable part is definitely watching Kaoru and Sentaro grow as individuals and friends through their mutual love of music. I’m not sure how great the rest of the story will be though – although the romance aspect seems interesting enough, it will fall flat without some more development of the female characters. But doubts aside, Sakamichi is quality entertainment, full of little gems of subtlety and depth of expression.

What are you all thinking about Sakamichi so far? Does everyone like it as much as they did at first, or do you like it more or less?

Here’s the awesome song they played at the bar in Episode 04 – Horace Silver’s “Blowin’ the Blues Away”. Enjoy, and I’m looking forward to the next episode coming out tomorrow… Actually, later today. 😉

Keepin' it real down in the sweet sunny south.
View all posts by kelfio »

← How Being An Otaku Can Influence Trade
Sankarea – 05 Review →