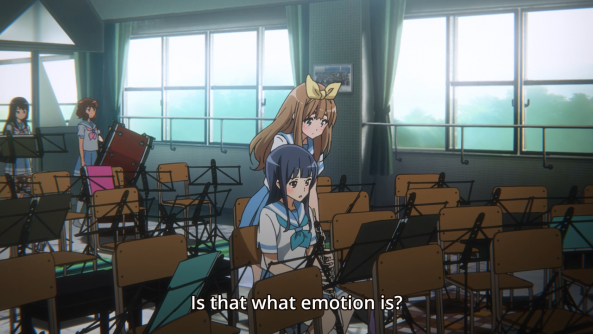 I guess, this robot’s AI still needs some work.

Hibike! Euphonium S2 04: For a moment, I really feared that Yoroizuka’s problems won’t ever get resolved. Especially since her BFF turned out to be a huge asshole. It’s incredible how much Nozomi thinks doesn’t need to be said. But somehow, it’s still Yoroizuka’s fault for not getting that, of course. How dare she make assumptions about Nozomi’s opinion, right?! When someone isn’t talking to you and suddenly does something drastic and surprising, you go to that person and demand answers!

Oh, and if you’re the person who decided to do something drastic and surprising… Well, you just sit back and have fun! Nothing wrong with that! 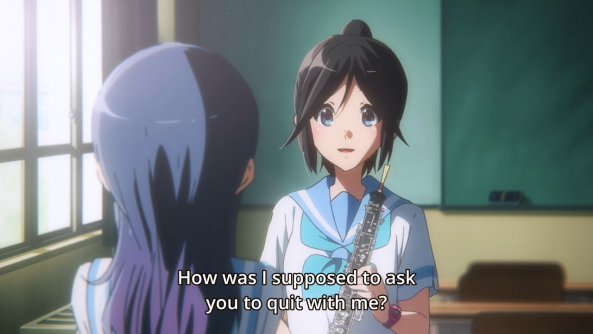 It’s a real conundrum, isn’t it? What are you supposed to do when you want to quit a club and your friend still looks like she’s having fun…? What a relatable problem (Naturally,LeavingYourFriendBehindAndNotAskingYourFriendIsOkay)!

Where is the line between friendship and intimacy? How do you differentiate your feelings for one person from your feelings for another? What determines who matters in your life? With the ending to the Yoroizuka-story-arc, the series has once again entered the arena of bafflingly oblivious yuri-storytelling.

Yoroizuka is finally being honest about her feelings. And of course, it all happens because Nozomi has finally decided to go talk to her. From a plot-standpoint, this story-arc couldn’t have ended less clumsily. Nozomi wants to talk to Yoroizuka, the latter flees, Kumiko finds her and then Yoroizuka just confesses to everything. Nothing Kumiko has done has led to this moment and she’s adding nothing to this scene. All she does is there to witness Yoroizuka’s emotional outburst. And that outburst could’ve easily happened at the end of the very first double-episode as all the series really needed to resolve the story was for Yoroizuka and Nozomi to talk to one another. That’s why I had called it an idiot-plot: The most obvious solution (them having an honest talk) is what the series frantically tried to avoid for four episodes while Kumiko was running between all the relevant characters to hear about the story. What makes it even more frustrating is that these four episodes had nothing else going on. Everything else this series has dealt with was incidental or just vague build-up for future story-arcs. There was no B-plot to fill the time until the Yoroizuka-thing had been resolved. This series has needed four episodes to get somewhere it could’ve gotten to easily right at the beginning.

Here’s where the whole yuri-angle has to be mentioned again. People often describe stuff like the relationship between Kumiko and Reina as yuribait. “It looks like yuri – but it isn’t really.” is what that means. But in my opinion, there’s no such thing as yuribait. It’s either subtext (that doesn’t get acknowledged) or the potential for an ALTERNATIVE interpretation (i.e., the series offers a satisfying non-yuri-explanation as well). What this series is doing, though, is offering some of the weirdest relationship-dynamics I’ve ever seen. This series’ definition of what friendship between girls looks like isn’t about them finding fun and support in such relationships. No, what this series seems to propose is that true friendships are these monogamous soul-bonding relationships. The same way Kumiko obsessively chased Reina during the first season, Yoroizuka has been chasing Nozomi in her own way the entire time.

The writing does little to define Yoroizuka’s relationship with Nozomi as a mere friendship. As she’s talking to Kumiko, her complaints start with jealousy. For her, Nozomi had been her best friend but to Nozomi she was just one of many friends (Yoroizuka feared she didn’t matter as much to Nozomi as Nozomi mattered to her). And when Nozomi didn’t talk to Yoroizuka about her quitting, she feared even more that Nozomi didn’t care about her. But instead of hating Nozomi for that, she clung to music as the last bit of connection she had with her. That isn’t how stories of broken trust and friendship go. Normally, the hurt party doesn’t continue pining for the lost friend. Also, the hurt party usually is angry over the perceived betrayal instead of fearing rejection (to the point of having severe anxiety-attacks). Once again, the series favors intimacy here over just showing trust. 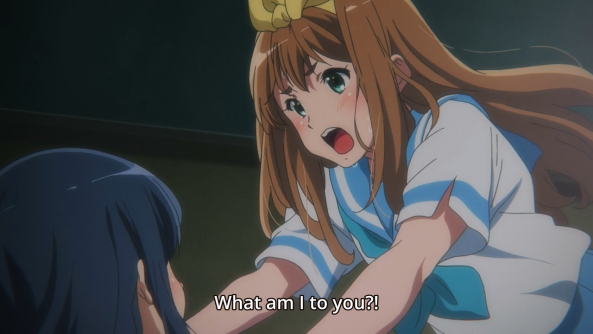 I’m sure everyone can remember yelling this at a “friend” during adolescence. What realism!

Where the episode lost me, was Nozomi’s explanation of why she didn’t talk to Yoroizuka. “Oh, I couldn’t possibly ask you to leave with me.” – wait, that’s it?! And the entire thing gets resolved because Nozomi hasn’t rejected Yoroizuka as the latter had feared. Nobody chastises Nozomi for her actions and she doesn’t seem overly apologetic and sad either. It comes back to the series weird stance on happiness. As long as people enthusiastically and directly tell the truth, everything is fine. With that logic in mind, Nozomi telling Yoroizuka how she had loved her music since middle-school and wants to hear her play is enough to fix the situation. This moment of truth is what ends the misunderstanding and it’s implied that everybody’s ready now to move on.

In a way, it’s the series’ focus on intimacy that gives the series’ drama its emotional beats. Moments like when for example Yoroizuka confesses to Kumiko or when Yuuko confronts Yoroizuka are what this series lives for. A big reason why so much of Hibike Euphonium’s relationships seem so intimate is how every emotional issue is treated like it’s high-stakes-drama for the involved characters. The stake in this first arc is solely the friendship between Yoroizuka and Nozomi but to Yoroizuka it’s all that matters. This kind of single-mindedness is something stories reserve for the most important relationships (which usually are romantic in nature). And you want to establish a hierarchy or at least a variation of relationships that are different in nature (Character A has a friend A and B and a lover A and ex-lover B, for example). This series, though, usually isn’t about multiple characters having to navigate their relationships to each other at the same time. The essential relationship that matters and is portrayed with intimacy and/or drama is between two characters. It’s why nothing in this series ever feels complicated. And it’s why being honest and direct is all the solution the story seems to need every time. It leads to a kind of storytelling that favors one-on-one-scenes and highly emotional outbursts/confessions as a way to resolve the tension.

Hibike Euphonium has a small bag of tricks for its storytelling. Emotional intimacy and exaggerated personal drama seems to be the end-point of everything the series does. It’s striking how every problem keeps the ensemble from being the best musicians who ever lived and how every solution turns the affected characters into complete professionals (with the exception of that one girl in S1 who couldn’t keep up with the practice and therefore decided to leave without any fuss).