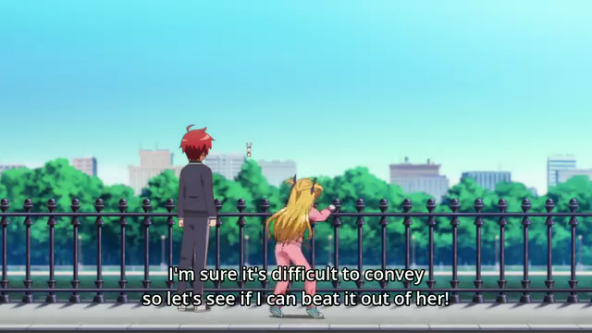 Nanoha ViVid teaching us all about how relationships work: If you don’t understand why some other person does this or that, you simply beat them long enough until their motivation becomes clear to you.

Mahou Shoujo Lyrical Nanoha ViVid 03: Einhart and Vivio fight two times. Both times Vivio loses – but Einhart learns to respect Vivio. That’s why’s everyone fine with Einhart carrying the unconscious Vivio away on her own…

Hibike! Euphonium 03: Kumiko has found out that she has joined an ensemble fraught with corruption. A few students’ commitment-issues destroy the integrity of the ensemble as an institution of decency and ambition. Reina meanwhile does the only thing she knows to do in this situation: She goes rogue and does her duty as ensemble-member without the consent of her superiors.

END_OF_DOCUMENT_TOKEN_TO_BE_REPLACED

That’s the best way to summarize this first episode actually: It’s a romantic comedy interrupted by outbursts of shrillness reminiscent of the original Haruhi-series.

Mahou Shoujo Lyrical Nanoha ViVid 01: A little girl becomes a woman because of magic and it’s all for the sake of kicking ass! Her two mothers, Nanoha and Fate, try to cope with that change.

Nagato Yuki-chan no Shōshitsu 01: Nagato is a shy nerd who secretly loves some lazy dude with a very laid-back depression and a heart of gold.

Arslan Senki 01: A prince gets kidnapped and learns that slavery isn’t all it’s cracked up to be.