So a new episode brings the start to a new case. This case revolves around an ex-yakuza called Kusakabe Masaya,38, and his daughter.

The opening scene starts off with Kusakabe being chased down the streets of Japan by Yakuzas. Kusakabe finds a spot to hide and makes a call to his daughter telling her to take the duffel bag that is in their house, run away from home and also to always remember that her mother that is in heaven is with her. The call ends with Kusakabe saying that that is the last time he will see his daughter.
END_OF_DOCUMENT_TOKEN_TO_BE_REPLACED

Posted in Anime, Kamisama no Memo-Chou

And so the start to a new series by BONES right after Gosick ends… Once again, this is a novel to anime adaptation.

This story takes place in the future and starts off a scene of Mouse being chased and shot followed by a scene with Sion, a genius with a high IQ, at school. It is Sion’s birthday and it so happens to coincide with a passing Typhoon through No. 6 (the district in which Sion lives). After celebrating his birthday with his good friend who gave him a kiss on the cheek as he prepares to head off back home, Sion returns home to study in his room.
END_OF_DOCUMENT_TOKEN_TO_BE_REPLACED 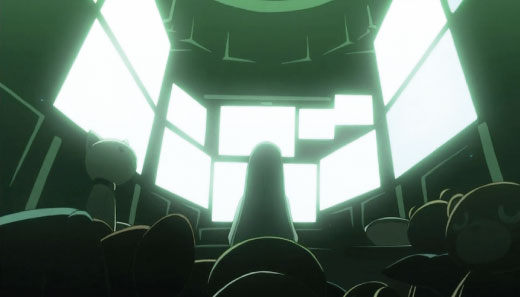 The episode revolves around a high school student named Fukushima Narumi as he gets entangled up in a case which Alice, a NEET (Not in Education, Employment or Training) detective is currently investigating, and he ends up being recruited as Alice’s assistant by the end of the episode.
END_OF_DOCUMENT_TOKEN_TO_BE_REPLACED

Posted in Anime, Kamisama no Memo-Chou

Summary
(some spoilers ahead)

The first thing I want to say is that the OP is so pretty, (though I know I wont be able to watch the anime if it was in that style throughout the whole way) the OP art is just beautiful.

So the first thing we find out in this episode is why Kazuya is in this elite school meant for aristocrats. And because of his black hair and eyes, he is known as the kuro shinigami. But we soon find out that the nickname he had acquired is related to a ghost story. At the suggestion of a teacher, Kazuya goes to the library where he begins to read up on ghost stories and this is where he meets a doll like girl called Victorique.
END_OF_DOCUMENT_TOKEN_TO_BE_REPLACED

After 11 years of Detective Conan I am pretty sure that many are tired of watching it or tired of waiting for some sort of progress in the plot of the show.

And finally a major move forward in the plot, the ‘Clash of Red and Black’ arc. This arc spans across 13 episodes (ep 491-504). Within the arc we are showed 2 murder cases with the constant presence of Hondou Eisuke and the participation of the FBI. Huge revelations, deaths, as well as more of the ‘organization’, it sure is a pretty exciting arc. Though as far as exciting action scenes goes, this was nothing big or great, but don’t forget that this is a kids show and it is not very ‘detective conan-like’ if it was filled with too much action scene.
END_OF_DOCUMENT_TOKEN_TO_BE_REPLACED

This episode mainly focuses on the game Mahjong played between Watanuki, Doumeki, Yuko, and Mokona.
Though it may have seemed to be a relatively filler episode at first, we find out later that the reason behind why they played Mahjong was because of the Cherry Blossom spirit that we encountered in the previous episode. END_OF_DOCUMENT_TOKEN_TO_BE_REPLACED

END_OF_DOCUMENT_TOKEN_TO_BE_REPLACED

In this episode, dreams and reality mix together to form a surreal feeling.
Which parts of what you see are just dreams and which part is actually happening?
Watanuki is suddenly experiencing dreams in the middle of the road without even knowing that he had fallen asleep.
The weirdest of all is that the dream was a mixture of Himawari’s dream and Doumeki’s dream.
And of course, it is Yuuko (and Doumeki’s grandpa) to the rescue!
Trading dreams, buying dreams, having dreams, and reality.
An alternate plane, balloons filled with dreams, strange creatures who collect the balloons, magical arrows and much more.
This is one weird episode that is true to the custom of the mystery filled xxxHOLIC series.

END_OF_DOCUMENT_TOKEN_TO_BE_REPLACED

This episode is the final ep in this 3-ep arc.

Summary: Watanuki is off saving the Zashiki-Warashi.

This episode mainly revolves around Watanuki and his lack of understanding of certain things.
He does not fully grasp the fact that his existence is important to some people.

While this might have been an episode about the eye, it is at the same time not.

END_OF_DOCUMENT_TOKEN_TO_BE_REPLACED

After a boring episode (that drained the life out of me) of Bus Gamer, xxxHOLIC fills my life back with joy and happiness in the second episode of season 2! wahahahaha

From the previous eps we know that Doumeki is trying to find a way to save Watanuki’s eye and so he has decided to read all the books on curses and stuff like that.