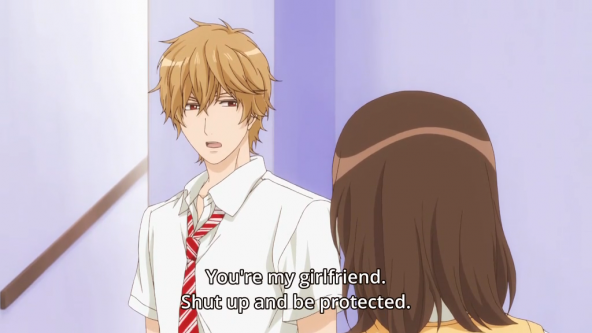 This time around I review the following series:

Akatsuki no Yona 01: A princess meets the man of her dreams – except the man of her dreams is a murderer. What will she do…?! Well, apparently, if the opening is to believed, she will start a war. But hey, that’s just the usual wacky environment of politics back then! After all, war and murder are nothing but a continuation of diplomacy by other means, right…?

Okami Shouji to Kuro Ouji 01: A certain girl is a bad liar – but because of that she meets her true love. Except her true love turns out to be a total asshole. Hilarity ensues! Also, the tough dude in that relationship finally has a chance to show off his vulnerable side to the woman he secretly loves!

Sora no Method 01: A girl comes back to a town after several years. Before she left that town previously she did a thing that did a thing and met some people who helped her do this thing do a thing and also there was a girl with glowing hair. Naturally she remembers nothing of this. It’s like Total Recall but without any sci-fi or action… actually she just has a bad memory and there are a bunch of kids who take this shit way too serious.