Guess this character’s not a big fan of haircuts…

ACCA 13-Ku Kansatsu-Ka04-06: Jean’s in deep trouble. A lot of people are still convinced that he’s instrumental to the coup d’etat movement. Mostly, probably, because he seems to make a habit of getting into trouble. Not that’s it’s hard to get into trouble as an inspector considering how imbalanced and flawed those 13 nations are. A nation that embraces isolation for the sake of abandoning innovation? Just how culturally paranoid do you have to be to do something like that?!

And the rest try to bribe Jean, so that he would reveal useful information and not look too closely at what some part of the elites in these 13 nations are planning. Guess it pays off after all to be at the heart of a conspiracy against your will… 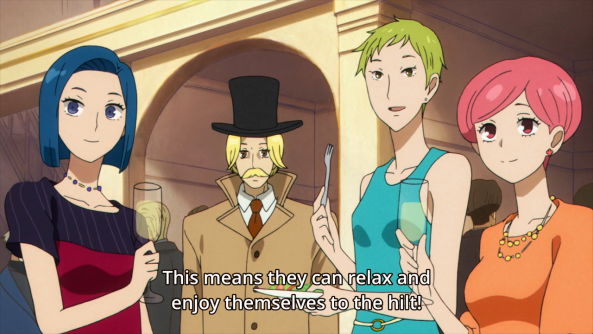 Moments like these are the low point of the show: Nobody cares that this new-years-party has an area for children. What makes this an even worse scene is that we actually never even see this part of the party. It’s a completely irrelevant detail!

If there’s one type of scene that defines this series, it’s the confrontation between two characters hidden in the subtext of their dialogue. Of course, visually this means we’re talking about two characters standing or sitting having a seemingly laid-back conversation whose tension is hidden in all the nuances of what the characters are saying and doing. And Natsume Ono’s writing has delivered every episode on this count. Visually, though, the show remains as inaccessible as ever.

With the exception of the superb episode 03, this series has never quite shown an understanding or interest for what is going on in its more subtle moments. Take that dinner between Mauve and Jean in episode 03 and compare it to the moment in episode 06 where Jean talks with Grossular. Even if you don’t pay attention to all the layers of the dialogue, the tension between Mauve and Jean is palatable. But in contrast to that, Jean’s dialogue with Grossular is as dynamic as two stick-puppets transforming into talking-heads. Even the flashback-conceit doesn’t help in this case and just seems like an extraneous visualization of something the two characters explicitly talk about.

What I mean with inaccessible isn’t that the series is particularly challenging in its visual style or that it’s too obtuse. The problem is that on one hand you certainly notice that the show’s budget isn’t the biggest and the visual style is mostly “efficient” and uninspired. The scene between Grossular and Jean is carried by the script and the voice-acting, not the visuals. For a show, though, where it’s less about what’s happening but rather who the characters are, it’s up to the visuals to express the revelations of characterization that happen in most dialogues. But the series mostly drops the ball here and so the series is mostly filled with these visually static scenes where characters just talk. In fact, I would argue that to get to the heart of the series the visuals are merely a distraction in how little they have to say about what this series is about.

And still, this is my favorite series of this season. It’s the writing that elevates this series to be more than it seems to be at first. The central conceit of the series is the question: What is ACCA? Go through these episodes and there are over a dozen times where various characters declare “ACCA is…”. And where it gets interesting is that these characters all give different answers. This is pretty much where the series lives and breathes: It’s a show about disagreement. There’s no perfect answer to the question “What is ACCA?” and the resulting disagreements get elevated to a political and epic level where numerous, powerful people move against each other.

The true tension of the show, though, comes from not knowing what the characters are thinking. Even Jean is a pretty enigmatic character and he pretty much symbolizes this tension. He’s at the center of it all and characters repeatedly say that they don’t know what he’s thinking. His habit of smoking further emphasizes this outsider-status. But through that tension dialogues become so much more important. Dialogues aren’t just about exchanging quips and infodumps, they’re about revealing ‘character’. A good dialogue tells you who the people are that are talking. And what they’re talking about also reveals the story because there isn’t really any point to two characters talking at length about their favorite ice-cream in an action-movie.

It’s here that the series, though, does another misstep. All the meaningful talking in the series is broken up by… just more talking. The three female coworkers and most of the Lotta-scenes may serve comic relief or may be a break from the tension but ultimately they’re just more scenes with people talking. The reason this isn’t working is that visually the series hasn’t anything more to offer than to direct the audience’s attention away from the main-characters’ serious problem and confront them with silliness and banality. Tonally it may be a change of pace but structurally it burdens the show with excessive talking. The show seldom tries to let visuals do the talking. Even the flashback-moments in episode 06 get needlessly explained in the dialogue between Grossular and Jean. We saw what happened and then Jean summarizes the whole thing again in the dialogue. What did we need the flashbacks for, then? The attention-span of the audience just gets shorter and shorter the more a series like this one relies primarily on talking to do the storytelling. And what’s tragic is that there are nuances to the story in this series but they simply get drowned in a mix of bad storyboarding and a monotonous narrative structure.

If anything, this show proves that Natsume Ono is a great writer. I haven’t read the manga but I’m certain that the manga-version will offer a better experience than this show does currently. A lot of what this show does wrong is how little it adds visually to the source-material. Despite how many animes cling to faithful adaptations, there will always be a difference between what a manga/Light-Novel does to sell a particular scene and what an anime needs to do to sell the same scene. And this series has so little to offer as an anime (rather than merely trying to copy what the manga was doing) that it feels like I’m engaging more with the source-material than what the anime itself is doing.

It’s still a recommendable series but it needs to be understood that what you’re mostly engaging with is the script here. Figuring out who’s doing what and why, as well as Jean trying to find a way out of the mess he finds himself in has provided an intriguing journey so far.