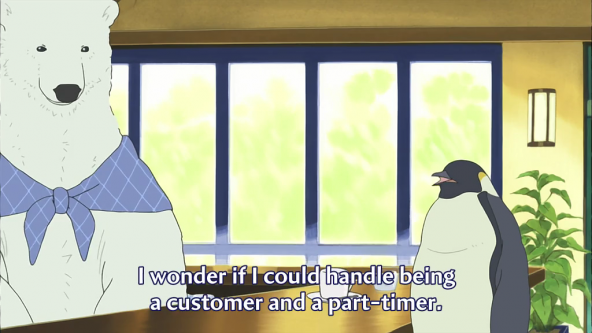 Somehow I got the impression that besides Polar Bear and Sasako-san nobody really liked working in this episode. The Penguin never even mentioned what he’s even doing, he’s just sitting around in the Cafe the entire time as if he owns the thing. He was even present when Polar Bear made the interviews so who the hell is this guy…?!

Thank God, that must be the first decent series I have watched of the new season! No, wait, Space Bros is quite decent as well… But the rest so far wasn’t that impressing of what I’ve seen… Well, I watch the whole stuff anyway. Anyway, Polar Bear Café, a series about a Polar Bear who owns a café… Yeah, I know, a real highbrow story if I ever saw one. It actually was entertaining on some level, though. Ain’t that a surprise? I mean, looking at Acchi Kocchi I feared animes would think “for kids” is the same thing as “for retards”.