Sakamichi no Apollon 06 – Bromance and Betrayal

This episode is my favorite of the series so far. There’s so much going on between the characters, and the problems aren’t resolved by simply paying some jazz together. I feel like this episode was everything I’d been expecting out of Sakamichi but not quite getting. Yippee!

Kaoru has really changed a lot since the start of the series (one year ago in their time). I was starting to feel annoyed at Kaoru’s “growth” up until now – it seemed like he had magically changed from a anxiety-ridden dweeb with emotional problems into a normal and cool guy, and all sometime between the first and second episodes. What I had been missing was a sense that Kaoru’s transformation had some context/importance/meaning. But finally, things have come full circle.

In the first part of the episode, Kaoru comes across as being confident, fun, and warm while still maintaining some of his seriousness, thoughtfulness, and introspection. I especially liked Kaoru’s attempts to dissuade Sentaro from going on a date with Yurika – without being too obvious, it’s clear that Kaoru doesn’t want to see his best friend get his heart broken. Even with Kaoru’s growth throughout the year, he’s still not the most socially adept guy out there, and in his attempts to look out for Sentaro, he does make a few blunders. It’s refreshing to see this continuity in Kaoru’s character come back… Although, I hope he doesn’t cry as much in the next episode.

I was a little confused by Kaoru and Yurika’s interaction in the art room (and that painting was hideous!). Essentially, Kaoru confronted Yurika about Jun by telling her that he saw her letters to him in his mail slot. Kaoru also let Yurika know that Jun hadn’t received her letters and that he might be with another woman. The subtlety and the dancing around the topic in that scene was perfect and made sense considering that both Kaoru and Yurika are from wealthy backgrounds not given to blabbing straightforwardly about personal affairs.

But what was Kaoru’s motivation? I’m curious. Was he confronting her for Sentaro’s sake, or was he doing it for her sake? It honestly seemed to me that he was doing it for Yurika – he let her know that Jun hadn’t gotten her letters, probably because he figured she had been waiting for a response. And he told her that Jun may have been with another woman, probably to ease the inevitable disappointment that she will face. Maybe Kaoru’s a pretty great guy after all?

Well, as soon as I was thinking that Kaoru was awesome, he went and let me down. He really handled Sentaro’s “betrayal” poorly. Really poorly. Awwww, come on Kaoru!

It was great though. Thank you, finally, we get to see that a year of being buddies with Sentaro and playing jazz music isn’t enough to fix every problem and psychological issue that Kaoru has. Yes! That was my main complaint with the series so far – Kaoru’s social issues in the first episode seemed huge and they had been essentially forgotten. Even the crazy buzzing noise in his head came back! I know I probably shouldn’t be happy about that, but this new found continuity has infinitely increased my enjoyment of the series. 🙂

One little thing I noticed was that in Kaoru’s flashbacks, it appeared as if he had friends in the past, but that they had abandoned him. Seeing Kaoru from that perspective made a lot more sense. It showed that there was never anything particularly wrong with Kaoru, and that he was perfectly capable of talking to people and getting along with others. Being abandoned (and I assume it happened more than once) was what caused him to choose to withdraw from others and become a loner, rather than risk getting hurt again. Knowing this makes it much easier to accept how quickly Kaoru became friends with Sentaro and Ritsuko.

So, the new guy…. Masuoka Seiji. Does everyone hate this kid as much as I do? What a turd. He needs to just pack up that stupid snaggle tooth and crappy bowl cut and go the hell home. Even his motives for playing rock music suck – he just wants to win some absurd sibling rivalry and prove that he is worth a shit. Never once did he say he played music because he enjoyed it. As much as I hate him, I’m pretty sure that Sakamichi’s style won’t just let him be a bad guy (and manipulative bastard – ARGH!!!). I’ve got a feeling that Seiji will eventually see the light (of jazz?) and come around. 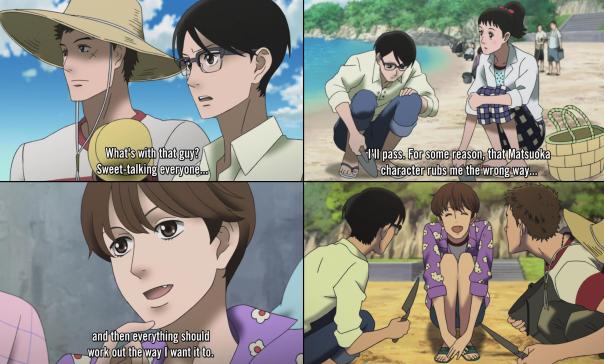 I’m not sure why Sentaro is joining Seiji’s band though. Wasn’t he a jazz-nazi? He gave Kaoru a hard time about classical music, so why has he been so easily won over by The Beatles? I want to think that Sentaro isn’t stupid enough to have been reeled in by Seiji’s sweet talk and lies, but perhaps he is. After all, Sentaro’s not the sharpest tool in the shed. 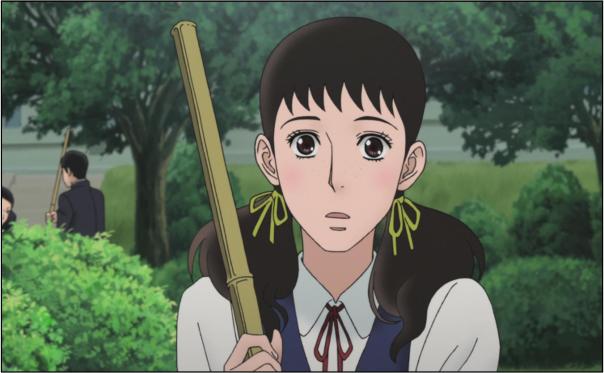 My only real disappointment with this episode was the continued lack of depth in Ritsuko’s character. This is getting frustrating. Not to mention, Ritsuko was at an all time high level of being whiny, blushy, and passive aggressive this week. I’m still confused by who Ritsuko is in love with. Is it actually Sentaro? And if she likes Sentaro so much, why is she always blushing and acting shy and cute in front of Kaoru? Anyways, the show is halfway over and I’m going to be very disappointed if none of the female characters get any background or development, especially considering that this is from a josei (aka for women) manga.

Well, folks, there you have it. A nearly random smattering of my thoughts on this week’s episode of Sakamichi. For the most part, the doubts I was having that I talked about last time have been erased, and I’m back on the Sakamichi band wagon. Sentaro leaving Kaoru to play rock and roll has a lot of potential and I’m sure that this arc will be the best yet. And, of course… I want to find out who was sitting at the bar in the end of the episode! See you next week!

Question: Do you also want to strangle Seiji like I do? I mean, ahem, do you think he has potential to be something more than a scheming, self-serving jerk, and do you think that his character will play an important role? And why do you think Sentaro is joining his band?

A big thanks to everyone who commented last week and helped to remind me of what I enjoy so much about Sakamichi! 🙂

For your listening pleasure, I’m posting in a YouTube video of “My Favorite Things”, although it’s never been a song that I’ve particularly liked. I think it has something to do with bad memories of playing it in 6th grade band….

Keepin' it real down in the sweet sunny south.
View all posts by kelfio »