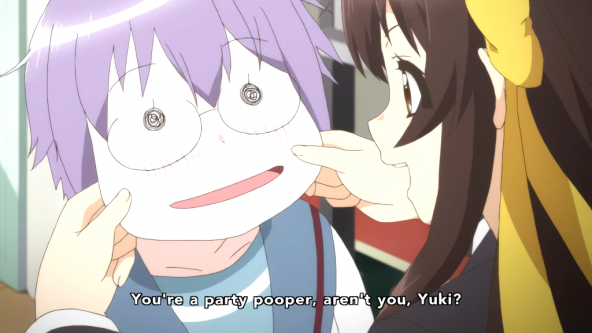 She is, she really is! Nagato’s new personality in this spin-off-series is less interesting than the old one, especially in romantic scenarios.

Nagato Yuki-Chan no Shoushitsu 07-11: Somehow Nagato manages to get closer to Kyon. Some might say it’s all thanks to the plot but whatever… Anyway, then one day she almost gets hit by a car but during the accident she becomes the emotionless alien-version of herself again and so… stuff happens which I guess, some people care about.

F/SN: Unlimited Blade Works 23: Gilgamesh wants to initiate an apocalypse because humanity has mostly turned into weed (in his opinion). Shirou, Rin and Saber are the only ones who can stop him. And… they pretty much get as far as to the point where a cliffhanger seems sensible. 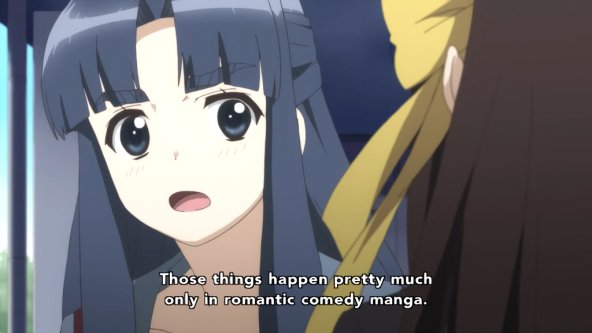 This feels less like the series being self-aware than the series apologizing for its trite romance-tropes.

A lack of substance has always rendered a lot of this series to feel like a contrived romance. Here you have this straightforward romance between Kyon and Nagato and the series is as contrived in keeping the romance from blooming as it is in slowly building it up. And as the search for a finale-premise starts the series can’t do anything more than to let another plot-convenient “accident” threaten the progress of their romantic relationship.

Romance needs two things: An explanation for why a couple should be together and some drama explaining why they can’t be together. Why Kyon and Yuki should be together is a very loaded premise. After all, this is a spin-off-series and so presumably a big part of the audience has already an established image of who should be in love with whom. That Nagato’s characterizations changed so drastically was inevitable in that regard. If the premise is all about Nagato and Kyon falling in love with each other, then naturally you have to create a reason for why Kyon doesn’t fall in love with Haruhi like in the original. That said, the romancing in this series is kinda bland. Kyon is a really good guy, Nagato is the ditzy, shy girl who somehow has fallen in love with the first guy who noticed her. And Kyon’s interest in Nagato mostly shows itself in loads of empathy and protective behavior. It’s pretty timid as far as love-affairs are concerned and so the series hit its first hurdle: If all that keeps this romance from happening is just Nagato’s personality, then why shouldn’t we all just want to fast-forward to the obvious conclusion of this story?

Haruhi appeared as a possible romantic opponent for Nagato but that got discarded pretty quickly leaving the series with a rather lame “will they, won’t they”-spiel for Kyon and Nagato. That stuff is boring as a sub-plot in other shows but when it becomes the main-attraction in the story you know that boredom will follow. The series tries to distract the audience with lighthearted humor and various character-antics but whenever the series tries to get serious and romantic it happens because of some contrived reason the script-writer has created. Nothing seems natural and everything’s very on-the-nose in the romantic moments of this show. The series heavily relies on the audience’s investment in seeing how this alternate take on that one Suzumiya-Haruhi-LN plays out. But by removing the drama of Kyon trying to find his way back into his own world, the series ends up lacking in the story-department. This romance alone between Kyon and Nagato has never been enough to carry any episode so far.

And so that’s where you get to the finale whose only way to introduce some drama is to turn Nagato into her “alien-self”. The setup alone with the 10th episode and the first five minutes of the 11th episode already started to drag out basic story-beats with lengthy shots where nothing happened, dialogues that needlessly danced around the obvious issue and a plot that aimlessly trudges forward without a sense of purpose. Really, the only thing this finale has done so far is to establish a reason for why this series’ ditzy version of Nagato has disappeared, therefore keeping her from pursuing a romance with Kyon and instead you get alien-Nagato who doesn’t feel anything.

At the end of the 11th episode Kyon and Asakura have already accepted that the previous Nagato has disappeared and are now trying to… help the current Nagato come to terms with having to fill in for the ditzy version of Nagato, I guess. I assume all it needs to get the old Nagato back is to get these glasses repaired and the series will get some drama out of alien-Nagato also realizing that she likes Kyon or whatever. But overall, this series once again offers a rather trivial story with blatant story-beats. Of course, it also doesn’t help that the score is never letting up to remind you that what you’re watching is supposed to be really tragic stuff. At times, it felt like the score was even pushier than the already very on-the-nose script.

This is one of those series that it utterly unremarkable. It isn’t bad. It does what it sets out to do. But it’s one of those series where reading the synopsis tells you all you need to know about this. It REALLY tells you all you need to know about this series. What this series has done with its premise is so trivial and on-the-nose-obvious that the only one who would find satisfaction is the Haruhi-Suzumiya-super-fan that simply wants to see more of those characters. For the rest, though… The comedy is fine in a rote way while the romance is timid and too straightforward for its own good. 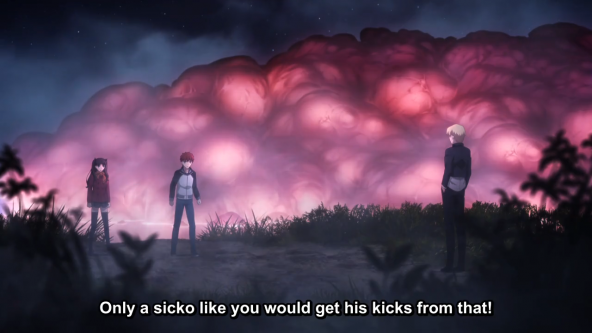 Fate/Stay Night is an ambitious story. You have to grant it that: It throws around a lot of big ideas about what a hero is, what the purpose of humanity is and how individuals should resolve conflicts between reality and ideals. Occasionally you get these glimpses of these great ideas in this series but in the end it really amounts to nothing more than who has the bigger “gun” (for some reason).

More than just focus, the tone of this series is also inconsistent. When you look at Gilgamesh in this finale, you get a Bond-movie-level villain with some ludicrously nihilistic ideals. And in terms of antagonists he’s actually the best villain this series has. It isn’t that he’s a great character but rather that his bigger-than-life ideals are perfect for this epic action that’s happening in this finale. When Caster or Illyasviel played the role of the antagonist it was done so with a caveat saying “They’re evil… but…!”. But this series’ writing never has been subtle or deep enough to warrant this sort of moral-grey-ish presentation. Especially since the UBW-arc is pursuing the idea of heroism being perfect as long as you commit to it without question.

This series takes itself SO serious when it should realize that its storyline is the epitome of teenage-pretentiousness and rebellion. Instead of making Shirou seem like a goody-two-shoes he should be simply cool. The problem with Shirou’s characterization is that he gets a lot of pathos when his character actually doesn’t deserve that. Shirou literally meets the “adult-version” of himself telling himself to stop doing whatever he’s doing but Shirou’s like “Fuck you!”. That’s a teenage-rebellion on an existential level! And even in this overly serious version the underlying notion is that trying to be a good guy is better than not trying to be one – no matter what the reality-check tells you. As overly serious as Shirou is he isn’t charismatic and as selfish and idealistic as his ideals are, he simply needs to be charismatic. Imagine a version where Shirou enters the confrontation with Archer and while the latter seems like a real sourpuss, the former is this likeable teen-rebel: You immediately give the story this life-affirming message as the worries of the future are physically present but get their asses kicked. In this version, though, you have all these great ideas but the underlying foundation, which is the story, is just this bland setup for a generic shounen-show.

Overall, the series really is just going through the motions in this episode. You have your high stakes, you have your mission-goals for what the good guys need to do and you have your confrontations with the bad guys. Nothing in this episode seems surprising in terms of plot and a lot of nice story-moments simply get buried by how little the series actually cares about that. For example, the idea that the Fake-Assassin is just some very talented guy who was known for being the real-life-version of a fictional character is simply a gold-mine in terms of exploring the idea of heroism and glory. But in reality it’s nothing more than a footnote in this episode.

After all these dull episodes it’s hard to even muster any sort of enthusiasm for this conclusion. I don’t care who dies and who lives and thematically it’s already clear that this series is all about how being good is THE BEST! Whatever nuances that are here simply get buried by this obvious path the series has chosen. Unless this adaptation has a drastic plottwist in store for the audience, I don’t think that there’s anything here that will excite the audience.

You already get into bad-writing-territory when the episode explains why it’s SO hard for Rin to save Shinji. The series says that the Grail is spewing this liquid which is simply the essence of curses. Rin has to go through that – but she can handle it because she swallowed some magical gem! But even so, she still obviously struggles to reach Shinji! For a series, that can be very “nuts-and-bolts”-y when it comes to its magic, there are also a lot of moments where “It’s magic, guys!” is all the explanation you get. That’s simply bad writing! Either magic is a mysterious force that sort-of just does what it does because of some occult reason or you create a magic-system that explains the magic in a science-like way.

Most of this episode is just build-up for the conclusion in the next episode (I assume that it will end in the next episode) and aside from that you just get some drivel about what motivates some characters to do the shit they do. When the series is big and crazy, it fits the mood of this finale but when it tries to take itself serious you immediately notice that this series isn’t THAT good. For all its great ideas you don’t get the story appropriate for those here. And that the series doesn’t realize that is its biggest downfall.