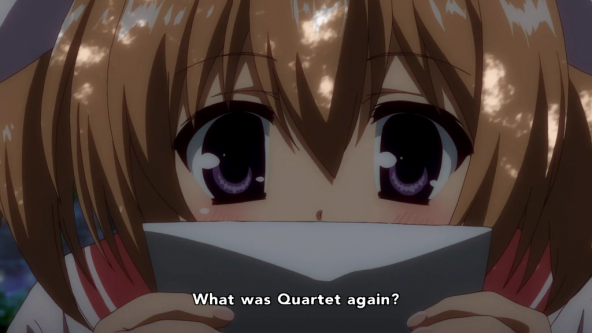 The list of coming up with bullshit-school-life-plothooks is endless in Hidan no Aria AA when you have a character who apparently knows NOTHING about the school she has been going to for quite some time!

Hidan no Aria AA 04/05: It’s Quartet-season! Meaning four-person-teams will fight against each other to get good grades… I guess. Look, the series barely cares about this shit. The series’ scriptwriters apparently couldn’t care less about this project. Five episodes and this series has yet to move forward from the flimsy premise of its first episodes.

Beautiful Bones 05: Nobody dies. And they all lived happily ever after! 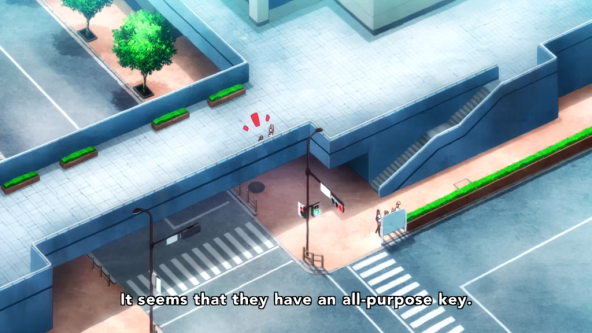 Team Akari has a plan and this is when we learn that the bad guys are sitting not even ten metres behind them spying on them. I don’t even know what’s worse: The good guys not noticing the bad guys or the bad guys barely hiding themselves.

Surprisingly storytelling only happens when you tell a story. So of course you’re in a bit of a pickle as a series if you wouldn’t want to touch the story-material even if your life depended on it. It’s one thing to do some filler-arcs at the beginning of a series but to never actually cover what the overarching story is supposed to be makes the series feel a bit empty. I’ve already mentioned how the overarching story that gets hinted at in an “See that mountain on the horizon? That’s where the story is.”-way doesn’t cohere with the current events at all.

So far, though, the writing has been surprisingly consistent. Plothooks and worldbuilding just keeps bubbling up from the nether-regions of this show and gets vomited upon the audience in order to make stuff happen for no particular reason. It’s all just cheap filler and yet these two episodes still offer not enough material to fill 20 minutes. I have to admit it’s kinda amazing to see filler-episodes that even within their filler-story-premises need to have filler-moments. Normally filler-episodes are characterized by a lack of story-development, lighthearted atmosphere and/or a formulaic plot. But all that is still not enough in these two episodes!

The series considers this pair of episodes a little arc surrounding the Quartet-fight – a concept nobody has ever mentioned before, needed to be explained extensively (because Akari might has well be amnesiac when it comes to her school-life) and has little effect on the overarching story of the series. One episode got dedicated to the training (and the exposition) and the other was all about the fighting. On a basic level you can at least say that the series has the idea for a story here. There’s some sort of test students have to take in the Butei-school and it’s a team-fight (which happens quite often when you solve crimes, as we all know). So, students pick teams and… Wait a second, why can someone just hire older students or outside help for these team-fights? How’s that fair? Anyway, so the team-fights are about these eye-flag each team has which has to be touched by the bee/spider-flags each combatant has and the flag has to be intact when it touches the opponent’s eye-flag in order to win the fight. So… it’s a dumb little game.

The writing in these two episodes can best be described as repetitious and unnecessarily complicated. There’s a scene where the opponent-team gets introduced (the leader’s the same rich-girl-type-character from the first episode) and later in the same episode these characters get introduced again! And in the fight Akari and her friends talk about their plan but then we find out that the opponents have been listening in which leads to these opponents repeating what we had just heard! Then you get in addition to that a team-fight whose rules complicate the simple concept of “Capture the flag” for no discernible reason. It feels like the writers first came up with the events of the team-fight and then tried to invent a rule-system that somehow fit these actions.

Of course that doesn’t mean that the few solid moments of plot these two episodes do have are actually effective. You got silly stuff like Akari looking for cover behind a bunch of bikes, Akari taking her training on an electronic rodeo-seat WAY too serious (without knowing what would happen in the fight it made no sense whatsoever to do that for training) and there’s awkward exposition like how there’s a class for Butei-students to be trained as ‘honeypots’. If more stuff like that would happen in an episode then it would be at least somewhat entertaining but there’s so little of relevance happening in these two episodes that you can’t help but feel bored by it.

Naturally at the end of the fifth episode they finally had to address the actual reason for this series: Akari’s shadiness and her connection to some other evil girls. So, in a moment of tension Akari suspiciously does something amazing again and we see these two girls talk like villains. It’s more or less a repetition of what the series had already established previously and I hope that at least with the sixth episode this series will take its story a tad more seriously.

Of course, her keeping Shoutarou around despite the toll it takes on her emotionally is proof of that.

With a show whose plothooks always involve death it would be easy to expect another mystery-show where solving a murder is the main-thrust of the story. Why did this person die? How did this person die? What is the just punishment for the crimes which led to a person’s death? Those and other questions are the things you’d expect this show to ask. After five episodes it has become clear, though, that this show cares less about who died and more about what the still-living people take away from that death. For a show that is all about stuffy bones and death, Beautiful Bones actually tries to find a life-affirming message in the tragedy of death.

The cases of this show aren’t the dead people but the living people. In the second episode the case was finding Ii-chan’s family and saving her sister. The third episode was concerned with Shoutarou’s classmate blaming herself for the death of her grandma and the arc of the 4th and 5th episode was about a guy fearing a death-curse because he blamed himself for financial blunders. From that perspective it’s actually strange on the surface Sakurako is supposed to be a lady-Sherlock. The emotional story-beats are so much more important than the intricate why exactly what is happening. Deep-down this is a series about people affected by death and reigniting their will to live after they got this brush with death in some way or another.

I talked about the show as a mystery-series until now and from that perspective this episode didn’t have to offer too many surprises. I’d already guessed the rough shape of the episode last week but I didn’t get everything right. The dude was actually suicidal and the painting’s ill effects were due to the mold on the backside. What is very obvious plot-wise once more is that everybody in this show’s a frigging moron and only Sakurako is allowed to have meaningful insights coupled with tons of exposition to back her up. Seriously the amount of exposition Sakurako throws around in this episode is a bit overwhelming at times. It just further highlights how little everybody else knows compared to her.

You kinda have to suspend your disbelief that this suicidal guy not only didn’t notice the discoloration of his nails but also didn’t notice the strange smell of the painting which he had put into a tiny room with bad air-circulation. And also he fell victim to the dumbest murder-attempt imaginable. Some guy sold him the painting with the most idiotic explanation (that the green color of the painting would help the baby grow calm and become an awesome person or whatever) and the rest is all predicated on the idea that the victim has no clue whatsoever about how to store a painting (even if it hadn’t paint with arsenic components, it still isn’t good to spend time in a room where a painting’s “backyard” becomes a hotzone for mold). And also the guy’s last suicide-attempt was hilariously bad. No one would EVER believe that he had just “accidentally” nearly chopped his leg off.

As I said, though, this show’s all about the living rediscovering their will to live after a death has happened. But in terms of emotional storytelling the show has yet to present one with depth or nuance. I would even say that the second episode came closest to have a good emotional storyline thanks to the shock-value of what Ii-chan’s story turns out to be. But since the only two characters related to that storyline were a baby and a very small child while the antagonist was a crazy drug-addict, you didn’t have a lot of things to relate to beyond the obvious. The third episode, meanwhile, was absolutely cheesy and that the mystery-portion was kinda stupid didn’t help either. What this arc has done is to dig a little deeper with this theme and explore depression and suicidal thoughts tonally and in terms of atmosphere, though with a grating lack of nuance.

For two episodes the character sat in a dark building while it was very rainy and depressing outside but the moment the suicidal guy rediscovered his will to live and Sakurako was done giving her little message to the audience, the sun was coming out. And the little epilogue also happened in a very brightly lit happy scene. Beautiful Bones likes to keep things on-the-nose for its storytelling just as it goes overboard with every bit of explanation delivered by Sakurako.

I still don’t care about Sakurako’s past but it makes more sense now why it matters in this series. Thematically Sakurako’s past is perfect for what the series is going for. But the emotional stories this series wants to tell all seem pretty straightforward so far. And turning every mystery into an echo-chamber where only Sakurako’s insights are of real value doesn’t help either to make these episodes more entertaining. Also, overly happy epilogues with people explaining what has happened to person x, y and z is bullshit. It isn’t the worst (that’s showing text after the end of a movie or episode doing that same thing) but the way it resets things by tying up loose ends and eliminate consequences while creating a happily-ever-after-image is not the way the first longer arc of a series should end. You could literally stop watching after this episode without feeling any remorse because of this bullshit-epilogue.

Well, unless you give a shit what Sakurako keeps babbling about when she not very subtly stares at Shoutarou as if she’s seen a ghost. Guys, I think, we can all agree this can only mean one thing: Shoutarou is the reborn Soutarou. It would be just like this series to do a cheesy thing like romanticized reincarnation.