The first breath is the beginning of death. Death is more universal than life; everyone dies but not everyone lives.

And come he slow or come he fast, it is but Death who comes at last.

The whole gang went to a trip to the beach to find Matsunaga-san who was said to be responsible in stopping the curse in their time.

All packed up, Teshigawara, Akazawa, Mochizuki and others from class 3-3 rode in two cars. Tensed at first, they safely left Yomiyama without any incident, convinced that the curse is ineffective outside the town. At the place to meet, Matsunaga-san was busy so they couldn’t see him, so they decided to spend the free time playing on the sand & the sea. 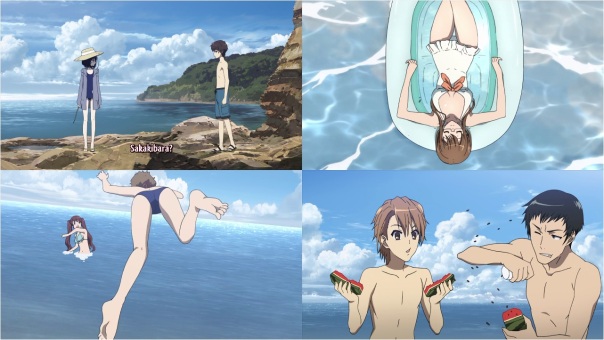 Apparently, the place Misaki went for her family trip was the same, as Sakakibara saw her at the rocky part area of the shore and approached her. Continuing the fun, Teshigawara had the most brilliant idea to make the most of the outdoor life. They split up into two teams to gather food, the head of countermeasures team: Teshigawara, Akazawa, & Sugiura, the non-existent team: Misaki, Sakakibara & Mochizuki, but in the end both of them tied and end up eating the things Rieko-san picked up.

Later on, Matsunaga-san came and started talking about the past as Sakakibara-kun & Akazawa-san started asking him. Still, neither Reiko-san nor Matsunaga-san remembered anything about the trip, the only thing Matsunaga-san was sure of, whatever that “thing” he left was not a note & seems like he took it to school.

A gust of wind suddenly blew and their beach ball flew, Nakao went to the beach to fetch it, but half way it seems like he drowned and was run over by a motor boat, Matsunaga-san on a trance said he left the thing on the classroom to protect them.

Author’s Note: and ssooooooooo with so many things piling up, I just happened to view the episode now. Yes, now. I wasn’t really procrastinating but, it seems I’m losing my important time to make reports & study? For exams XD. End.

Owwwwwwwwh, a breather, just what I need to catch up.

After 8 episodes of killing students & nurses & teachers & moms & who else died? Well, whatever, ‘Hair Stand’ gave us not really something that we’ll make our hair’s stand, so wherever did that title came from? Speaking of titles, Another do have weird titles~ I do think it’s somewhat related, but I dunno, it’s just plain weird.

Weell, anyways again, since there’s nothing major major happenings in the episode, except that a random classmate died? Nah, not really that random, I remember seeing him already talking with Sugiura & Akazawa at the next episode when Sakuragi-san died or somewhere but unless he’s a major character that needs some attention, he’s just like any other classmate in the class. The end. No need to mourn over his death : )

I do think this episode is refreshing, unlike those cliché beach episodes airing now a days, Another feels so normal, I mean normal, as in down to earth realistic normal. Normally (animation), guys would be all over seeing girls in swimsuits and making stupid – ecchi statements about it, especially in teshigawara’s case, it’s likely to be expected but it didn’t and that’s what’s nice about this episode – just your normal students spending the afternoon relaxation, sun bathing and playing watermelon bash on the beach.

And again, Since class 3 ain’t a normal class at all, somebody died it can meant, wait let me count how many we can say about that:

Now I just wonder what that “something is?” – a thing that could prove whose the another person?

Over all, I do think, Another has a very contradicting mindset. There are times when I think it’s very down-to-earth, but there are also those times when I think their actions are far from how people should normally act. Solid episodes, yes, but just like what someone said, “How can you enjoy a story if the origin doesn’t make any sense?” but then again, judging by our director Tsutomu Mizushima we’d be expecting a “SHAM” in the end, where everything is just a dream and you just wasted the whole season watching a stupid show believing its good, yes, you’ve just been TROLLED! XD

THE SEASON IS GETTING HOT ALREADY : ) 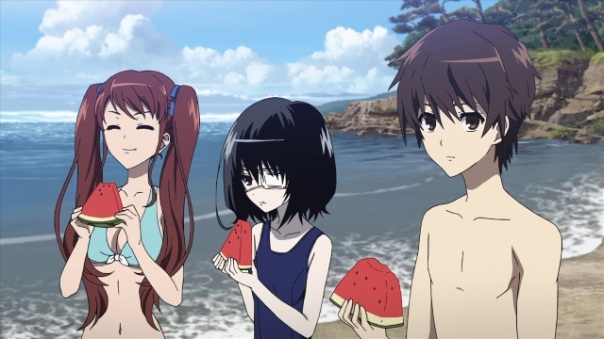 It’ll always be my personalized Shaved Ice for me : 9

I'm a writer whose waaay too lazy to write. Tsubaki -desu~♥
View all posts by tsubaki.seishuu »

Posted on March 3, 2012, in Anime, Another and tagged anime reviews, Another. Bookmark the permalink. 2 Comments.